For me a primary and powerful influence, in the past, now and no doubt the future. Carl Barks was both writer and artist and excelled at both. 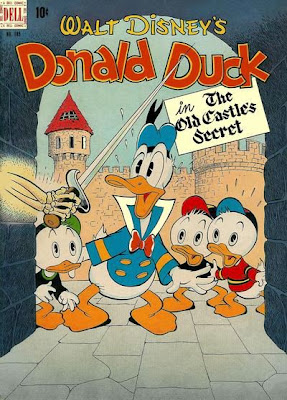 Carl Barks has had a fundimental influence on my life and art.
I can only acknowlege with gratitute the breadth of this mans impact on my career.

Barks has had a huge influence on me from the pleasure of reading and looking at his art - a master of the comic form and character expression that I consciously learned to emulate and unconsciously find myself measuring what looks right by... To the point of having one two page duck story published: 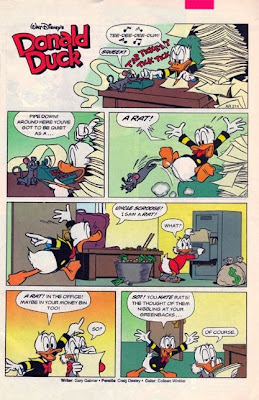 My own adequate effort

Barks was the "Good Artist" for me and my siblings, just like umpteen thousands of fans around the world. We called him the "good artist" before ever hearing the phrase at large and could tell the difference between his art and any other artists. We also knew that Barks wrote a better story than anyone when it came to Disney Duck stories. There were a lot of lazy afternoons spent reading our collections of duck stories. A lot of pleasure got from those comic books.
The intelligence, wit and down to earth-iness that Barks put into his stories resonated with us (me) in a way that no other artist/writer has come close to. Comparing the level of humanity and intelligence in the old Barks duck stories to any comic really casts a harsh light on a large amount of what is published. Particularly material directed to "kids". Barks kept it for kids, assuming that (10 year old) kids were sharp and would know something of what his duck adventures were about. Barks also presented his stories with that old fashioned adventurous spirit and cultural imperialism that was the spirit of the times (til the 70's - 80's when navel gazing, zen = no thought (no statement) and virtual reality became the safe and humane form of adventure and cultural evangelism - that would be a rant for another time...)

What I bring forward from what I learned from Barks.

Barks built his stories like little plays in a box. This in-a-box style of presentation is something I have come to really appreciate in artists that mastered it. The confines of a box are like the confines of a stage (or TV) making an idea work in a strictly confined area. Telling stories in the confines of multiple boxes laid out in uniform rows - is a super skill. The little stage play that goes on in the boxes is all about the characters. The box format restricts the artist to a focus on character and character in setting. The story has to be about (human) drama.
Barks stages his scenes in a way that sets characters into fields of significance.
Character. Ground. Foreground, middle and background.
Characters are often bent right into the boxes and forced to interact with their environment. 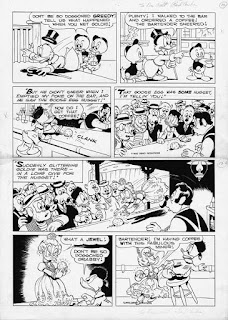 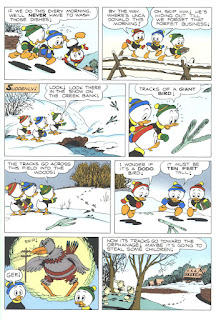 Character personality.
Using more or less standard old fashioned Disney expressions, Barks was able to project emotion with his characters. (Interrupting this train of thought - as an artist learns more about someone who inspires him and WANTS to learn more - digging into what inspired the inspiring artist is important. LEARN who your favorite artist learned from. Learn from them AND learn who they learned from. The old Disney style of creating emotional expressions has been around a long time. Sharpened by smart artists working to create a visual vocabulary that reads in motion and from a distance.) Carl Barks used the standard visual vocabulary for emotions to tremendous advantage and enhanced it with tricks of the caricature trade that have been around for even longer. He did not skimp on putting feelings on the faces of his characters. He knew the "anatomy" of his characters and could have them express emotion from any angle. 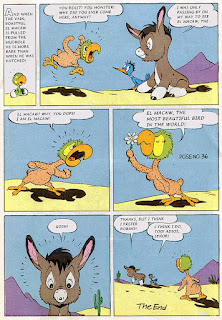 Solidity.
Its a funny thing to talk about solidity or mass or volume in a medium that is two dimensional. I am drawn to art that has (implied) volume, mass, solidity. Barks' fields of significance is enhanced by each field having a mass and weight that convinces (me) that there is depth and weight in the world he is drawing. Its not just the black cast shadows. Its the way things look like they might have something on the back side. Or the way scenery and land masses seem to have gravity. 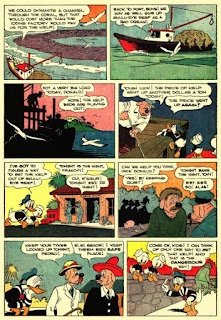 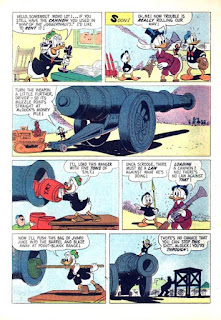 Line.
Barks' liquid line has personality itself that adds to the whole. Clean, thick/thin lines that carry significance... That frame the space inside and have flourish. The tight constraint of that line to the service of the art is also clear. No flyaway gesture lines. Just strong contour with personality.
That would be a virtue of Barks' work that makes it outstanding. Barks did not skimp. He put in more - his readers could tell the difference. The formula artists that drew similar characters at the same time often did so with a few (skimpy) poses and expressions, leaving the viewer feeling unsatisfied. Barks shared freely - the richness of his experience and thinking.
Posted by Craig Deeley at Wednesday, March 30, 2016